Feedback from Sleep Store customers is that Rhuger Mixture can be very helpful for babies suffering from wind, and that it makes it easier to burp your baby. It is also useful for babies who become constipated once they start on solids, which can otherwise cause settling issues.

During the early 1980’s, it was discovered that the widely used silicone based products may have some problems associated with their use in infants. In some premature babies, these products could be contraindicated. Rhuger Drops contain no silicone.

It is most important to follow the dosage instructions for the new Rhuger formulation - the dose must be given with warm water.

"My girl has terrible wind due to a high palate and not being able to feed without getting a belly full of air. I tried ALL the other drops and would spend hours trying to get the wind out so she could sleep only to lay her in bed and have her scream and need to be burped again. I tried the Rhuger when she was 8 weeks and found it worked but gave her a sore stomach. Tried again at 4 months and i LOVE it. Wouldn’t be without it. A few squirts before bath time and relaxing in the bath gets rid of all the wind and baby sleeps 11 hours at night. Happy baby = Happy Mummy"
Posted on Apr 26 @ 08:14 PM

Erin says ...
"I used Rhuger drops for my son as he had reflux. I had tried other wind medications without success, but felt that using Rhuger alongside other measures such as feeding him in a sitting position, keeping him upright after feeds, tilting his cot and sleeping him on his side we were able to keep it manageable. Eventually we were able to reduce the dose down the dose until after 6 months he no longer needed it!"

The formulation is a mixture containing the herbal liquid extracts of Rhubarb Root ( rhei pulv) and Ginger Rhizome ( Zingiber Officianale), with Magnesium Carbonate (mag.Carb.lev) in a natural glycerol base.

No preservative, sugar or alcohol or artificial additives are used in the manufacturing process. The alcohol (ethanol ) present , residual from the liquid extracts used is below the 0.1% level required by ANZA to be printed on the label.

The formulation prior to September 2014 contained Methylcellulose and the preservative paraben ( methyl & propyl benzoate), these have been removed and the mixture substrate has been restructured without artificial additives or preservatives.

The shelf life has been extended as a result of the stability enhancement and the use of the reformulated Rhuger mixture substrate.

We offer fast, economical shipping across New Zealand. All items on our website are in stock, ready to dispatch (excludes pre-order or custom size items). Most orders arrive within 1-3 business days. Auckland shipping is generally overnight or you can choose Click and Collect.

Shipping starts from $5 for small items. Just add your items to your cart and use the Shipping Estimator in the Mini Cart or Cart with your post code. Please double check your shipping in the checkout, particularly for large items which the estimator doesn’t accurately calculate.

We ship with Courier Post & Fastway. Packages are sent Non-Signature Required unless over $350 value or you request Signature Required for security concerns. If you are rural, we don’t charge extra but please do include a note on your order so we can ticket your package correctly. Please allow additional days for rural or you are ordering during holiday periods or major promotions.

Free shipping is available when you spend over $100! Please note bulky or heavy items are excluded from this offer and you can confirm the correct shipping at the checkout. Unfortunately our Cart Shipping Estimator does not accurately exclude large items from free shipping calculations. We apologise for any inconvenience with technical limitation.

We have expert staff available to help you choose the perfect item – how can we help before you purchase? However, when you do purchase something that doesn’t fit or isn’t quite right, we offer an excellent returns policy and the best possible customer service.

We also know life with babies and children is busy, so you have up to 365 days for your returns and exchanges to come back to us:

Our Returns and Exchanges page has full details, including product specific returns information and our Returns Form. 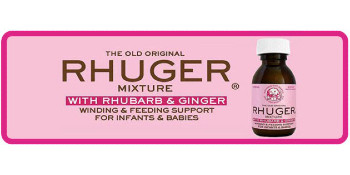 Rhuger mixture has been a favourite of Sleep Store customers for years, to help with babies suffering from wind problems that make them uncormfartable and unable to sleep.The Rhubarb Root/ Ginger Rhizome/ Magnesium Carbonate mix seems to works wonders for windy babies. Midwest Pharmaceutics, a manufacturer based in Hastings, NZ manufactures Rhuger Mixture for Rhuger Products Limited a company owned by Dunedin Pharmacist Ian Waters.
×
×
×
×

Please confirm your country or region to ensure you’re browsing the correct store.